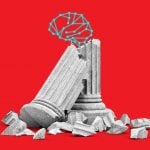 Last month, Stanford researchers declared that a new era of artificial intelligence had arrived, one built atop colossal neural networks and oceans of data. They said a new research center at Stanford would build—and study—these “foundational models” of AI.

Critics of the idea surfaced quickly—including at the workshop organized to mark the launch of the new center. Some object to the limited capabilities and sometimes freakish behavior of these models; others warn of focusing too heavily on one way of making machines smarter.

“I think the term ‘foundation’ is horribly wrong,” Jitendra Malik, a professor at UC Berkeley who studies AI, told workshop attendees in a video discussion.

Malik acknowledged that one type of model identified by the Stanford researchers—large language models that can answer questions or generate text from a prompt—has great practical use. But he said evolutionary biology suggests that language builds on other aspects of intelligence like interaction with the physical world.

“These models are really castles in the air; they have no foundation whatsoever,” Malik said. “The language we have in these models is not grounded, there is this fakeness, there is no real understanding.” He declined an interview request.

A research paper coauthored by dozens of Stanford researchers describes “an emerging paradigm for building artificial intelligence systems” that it labeled “foundational models.” Ever-larger AI models have produced some impressive advances in AI in recent years, in areas such as perception and robotics as well as language.

“These models are really castles in the air, they have no foundation whatsoever.”

But big models are problematic, too. Language models inherit bias and offensive text from the data they are trained on, and they have zero grasp of common sense or what is true or false. Given a prompt, a large language model may spit out unpleasant language or misinformation. There is also no guarantee that these large models will continue to produce advances in machine intelligence.

The Stanford proposal has divided the research community. “Calling them ‘foundation models’ completely messes up the discourse,” says Subbarao Kambhampati, a professor at Arizona State University. There is no clear path from these models to more general forms of AI, Kambhampati says.

Thomas Dietterich, a professor at Oregon State University and former president of the Association for the Advancement of Artificial Intelligence, says he has “huge respect” for the researchers behind the new Stanford center, and he believes they are genuinely concerned about the problems these models raise.

But Dietterich wonders if the idea of foundational models isn’t partly about getting funding for the resources needed to build and work on them. “I was surprised that they gave these models a fancy name and created a center,” he says. “That does smack of flag planting, which could have several benefits on the fundraising side.”

Emily M. Bender, a professor in the linguistics department at the University of Washington, says she worries that the idea of foundational models reflects a bias toward investing in the data-centric approach to AI favored by industry.

Bender says it is especially important to study the risks posed by big AI models. She coauthored a paper, published in March, that drew attention to problems with large language models and contributed to the departure of two Google researchers. But she says scrutiny should come from multiple disciplines.

“There are all of these other adjacent, really important fields that are just starved for funding,” she says. “Before we throw money into the cloud, I would like to see money going into other disciplines.”