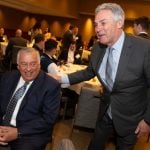 Any bill being worked over by a joint legislative committee on sports betting needs to include college games if you really want to prevent problem gamblers from getting themselves into trouble, the Speaker warns.

“There is no bookie that I know that will check you into a rehab to help you beat your gambling addiction,” House Speaker Ron Mariano said Thursday. “There is no bookie in the world that is going to give you an extension on what you owe because you have a gambling problem.”

Mariano was the keynote speaker at the Greater Boston Chamber of Commerce’s Government Affairs Forum. He spoke on a range of topics, including the need for greater funding for childcare and the need to embrace offshore wind, but highlighted the importance of including the college betting in any potential change to the state’s sports betting laws.

State law now prevents betting on sports — college or otherwise — and residents of the Commonwealth have been known to cross the border into neighboring states where the practice is legal.

“According to DraftKings, 35% of all Celtics playoffs bets — which could have been me — made in New Hampshire by Massachusetts residents. A similar trend could be seen during March Madness, with 28% of bets in New Hampshire coming from residents of the Commonwealth,” Mariano told the Chamber.

After speaking, Mariano told reporters that the state Senate’s version of the bill, which did not include sports betting, was too focused on controlling the supposed vice they were legalizing, he called it “paternalistic” and didn’t actually prevent people with gambling problems from participating in their addiction.

“You know, That’s why I have consistently advocated for the legalization of both professional and collegiate sports betting, and it’s why the House legislation passed last year does just that. If the legislature only acts to legalize gambling on professional sports, we will be leaving a significant portion of the industry in the hands of the black market,” he said.

The point, he told reporters, is that any support offered to gamblers is not made available to those participating in an illicit market.

According to Mariano there is a lesson to be learned from past changes in the law.

“From 2019 to 2020, Massachusetts saw a steady migration of folks off the black market of marijuana, and towards the legal cannabis market,” he said. “As we continue to see that trend increase, and having recently reached $3 billion in gross revenue, we can apply the same lessons learned to collegiate sports betting.”

Mariano also spoke of other proposed tax breaks possible before July 31 end of the legislative session, specifically an increase in estate tax.

Gov. Charlie Baker has proposed raising the bar at which the tax begins to $2 million. Mariano wouldn’t set a figure, but he said he is open to that and other proposals.

“We’re working on something. My goal is to have something done,” he said.

BOSTON, MA – May 26: Speaker of the House Ronald Mariano with Boston Chamber President and CEO Jim Rooney before speaking at the Boston Chamber of Commerce’s Government Affairs Forum at the Westin Waterfront on May 26, 2022 in Boston, Massachusetts. (Staff Photo By Matt Stone/MediaNews Group/Boston Herald)