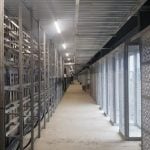 Northern B.C. is no stranger to mining, but an Australian tech company is hoping to strike digital gold in Prince George and Mackenzie.

Iris Energy is building two data centres in northern B.C. to take advantage of the province’s low-cost, clean energy supply, Iris Energy senior manager of investor relations Kane Doyle said in an email. Affordable electricity is a key factor for Bitcoin miners, and the trio of data centre buildings under construction in Prince George are expected to require 50 megawatts of power.

According to Coinbase.com, Bitcoin mining is, “the process that Bitcoin and several other cryptocurrencies use to generate new coins and verify new transactions. It involves vast, decentralized networks of computers around the world that verify and secure blockchains – the virtual ledgers that document cryptocurrency transactions. In return for contributing their processing power, computers on the network are rewarded with new coins.”

As of Iris Energy’s April update, construction had begun on the three data centre buildings in Prince George, and the buildings were expected to be energized by the third quarter this year. Additional data centre capacity was expected to come online next year.

This spring the City of Prince George issued building permits to Iris Energy for two buildings associated with the Prince George data centre, with a combined value of more than $8.5 million.

In Mackenzie, Iris Energy’s first B.C. 9 MW data centre has already gone online, and 41 MW of additional data centre capacity is currently under construction and expected to be completed in the third quarter this year.

Doyle said Iris Energy is committed to mining Bitcoins in an environmentally-sound manner.

“Our proprietary data centers (designed in-house) are optimized for operating performance and enhanced miner life (e.g. our unique airflow system and recirculation design takes advantage of the heat generated by the computers and also helps minimize our environmental footprint as no secondary heating or air conditioning is required),” Doyle said. “Our proprietary data centers and operational efficiency have recently been ranked (by an independent analyst) as one of the best in class (vs. other listed miners) in terms of Bitcoin mined per unit of computing power.”

The company picked Prince George and Mackenzie to build their data centres because they “provide access to abundant low-cost renewable energy,” he said.

“We are helping to replace large industrial loads which have exited the network at a time when large volumes of supply is coming online from new hydro generation projects committed many years ago. Therefore, in regulated markets (where utilities seek to recover their required return on capex) our load and additional revenue to utilities contributes to lower power prices to all consumers,” Doyle said. “We are able to bring employment and economic activity to rural communities that are often the hardest hit by declining industrial activity.”

The company recently announced a Community Grants Program in Mackenzie that will see the company provide up to $100,000 per year to support local community projects in the areas of community participation, sustainability, safety, technology and learning.

“We are committed to supporting local communities including improving the welfare of the Indigenous communities in which we operate. In addition to increased investment and economic activity, initiatives currently being explored include local employment, training (including apprenticeships), community workshops and annual grant programs,” Doyle said. “We proudly sponsor local fire departments and sports teams, including the Mackenzie Mountaineers!”