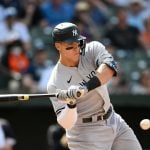 When the New York Yankees are playing well, good luck hearing much about any other team.

And when a player is leading MLB in home runs for a first-place Yankees team, that’s a perfect recipe for a ton of publicity and an MVP award.

The odds don’t reflect Aaron Judge’s true chances to win AL MVP quite yet. They are dropping. He was +600 to win MVP at BetMGM last week, and he’s +450 as of Tuesday morning. There still could be some value in those odds.

Judge isn’t favored yet, but that might change if he and the Yankees keep rolling.

As of Tuesday morning, Los Angeles Angels superstar Shohei Ohtani is the MVP favorite. He’s +210. Ohtani’s Angels teammate, Mike Trout, is +450, tied with Judge. Nobody else has shorter than 10-to-1 odds.

If you want to bet Judge to win MVP, Ohtani is a problem. The Angels are 26-17, finally in playoff contention. Unless Judge decides to start pitching, Ohtani’s two-way brilliance will always give him an MVP argument that no other player has. He won it last season and it’s possible that as long as Ohtani is in his prime, he’ll break the MVP voting. You could vote for him every season in his prime, based on his unique dual value to the Angels.

That’s generally not how voters work, however. They like to spread awards around. The era of Wayne Gretzky winning eight straight Hart Trophies is probably over.

And, Ohtani’s excellence could end up being overshadowed by Judge anyway. Again, when the Yankees are involved, that’s all you’ll hear about this summer.

The New York Yankees’ Aaron Judge in action during a game against the Baltimore Orioles, Thursday, May 19, 2022, in Baltimore. (AP Photo/Nick Wass)

Judge off to a great start

Judge hit two more home runs on Tuesday. That gives him 17. Nobody else in MLB has more than 12. A little more than a quarter into the season, Judge is on pace for about 65 home runs. Even if he gets to just 50 and that leads the league, it might be enough to eclipse Ohtani or anyone else who makes an MVP run. Maybe voters will give Ohtani the Cy Young Award instead.

Judge isn’t just hitting homers. He has a .325 average. Judge leads the American League with 35 runs scored. He has a 1.113 OPS. He’s putting up incredible numbers. And with home runs down around MLB after changes to the ball, Judge’s 17 stand out. The Yankees also have the best record in baseball, and if that continues, it’s something voters will notice.

It’s just late May and the season is barely getting going, relatively speaking. There’s also the injury concern. Judge has played more than 112 games in a season two times in his first six MLB seasons. He probably needs to play nearly the whole season to win MVP over the Angels stars, assuming they stay healthy. There’s also a lot of time for someone further down the odds to get hot and beat everyone for the award.

But Judge has plenty in his favor early this season. He’s already a big star. He has never won MVP (he surprisingly didn’t win when he had 52 homers in 2017). He is lapping the field in the home run race. He plays for the Yankees. The Yankees have the best record in baseball. If he continues on this pace, he’ll be the MVP favorite before too long.