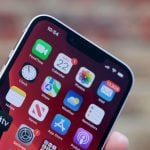 A nasty bug has been going around affecting iPhone users that can cause the iMessage and FaceTime apps to randomly deactivate with no way to turn them back on.

The news comes from various Twitter users including prominent Apple leaker and Bloomberg reporter Mark Gurman, all of whom detailed their experience with this bug. So far, this problem is limited to users on the T-Mobile and Verizon networks. That may seem like good news at first if the problem is limited to just two networks.

However, Verizon and T-Mobile have the widest service networks in the United States, and with over 113 million iPhone users in the U.S., this could be a major problem.

The problem is specifically affecting the eSIM chip, according to 9 To 5 Mac. The eSIM chip allows people to set up and activate their phones on a network via software without having to use a physical SIM card or visit a carrier store. And if you don’t recall, a SIM card is what allows your smartphone to make calls, send texts, and connect to the internet over a cellular network.

The purpose of the eSIM chip is to make setting iPhone easier to do. Unfortunately, no one knows exactly what is occurring inside the eSIM chip that’s causing the problem. According to Gurman, this bug has existed for a while. It affects phones running iOS 15.4, 15.5, and 15.6 beta 1.

Both Verizon and T-Mobile appear to be aware of the bug as several people in that Twitter thread, including Gurman, contacted their carriers for help. So far, Apple has yet to acknowledge the bug, let alone roll out a patch fix.

Gurman states that the only solution is to insert a brand physical SIM card into an iPhone to get around the bug.

It’s also possible to remove your eSIM account and get a new one reissued to your iPhone. But Gurman advises against this because the process is too “complex for most people and shouldn’t need to ever to be done.”

One person describes his experience with reissuing an eSIM via T-Mobile. According to the user, T-Mobile had to reissue the eSIM three separate times and it took 30 minutes for the last one to activate. But then that caused further problems with the line and required calling the carrier again.

It’s unknown if or when Apple will fix this problem. TechRadar has contacted Apple and Verizon and will update this story with their replies.