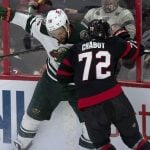 With only a few days left in the 2022 legislative session, a Minnesota Senate panel advanced legislation Thursday to legalize sports betting in the state.

The Senate Finance Committee approved the measure on a 5-4 vote and sent it to the full Senate for a final vote.

The Senate bill differs from one previously passed by the House. Both versions allow sports betting online and in Indian casinos. But the Senate version also allows sports betting at the state’s two horse racing tracks.

“We believe it’s important as well to have the tracks involved in this as we go forward, to provide a solid product for the consumer across the board, and make it available in different venues and different locations for the consumer,” he said.

It’s unclear when the Senate might vote on the bill. Lawmakers face a midnight Sunday deadline for passing bills.

“Every time we expand gambling, we have a bigger problem with it,” Marty said.

Sen. Mary Kiffmeyer, R-Big Lake, complained about a lack of public testimony on the late-in-session bill.

“The voice of the people of Minnesota can’t be at the testimony table,” Kiffmeyer said. “They’re shut out from all this.”

You make MPR News possible. Individual donations are behind the clarity in coverage from our reporters across the state, stories that connect us, and conversations that provide perspectives. Help ensure MPR remains a resource that brings Minnesotans together.

Donate today. A gift of $17 makes a difference.