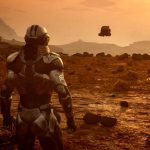 A developer has created a short Unreal Engine 5 demo inspired by Starfield and Mass Effect 4, giving us a glimpse of what the upcoming space-faring RPGs might look like.

Pasquale Scionti, a senior lighting and Lookdev artist at development studio Ninja Theory, created the demo as a riff on Starfield and Mass Effect 4 ahead of their launches. They shared the minute-and-half video on Twitter, alongside a couple of choice screenshots.

The demo shows a lone astronaut walking across a sepia-tinted planet that looks something akin to Mars. A small flying vehicle hovers nearby, while a meteor shower rains across the sky. Towards the end of the video, the cosmonaut approaches what looks like a parked spaceship, although one with plenty of appendages.

The clip really shows off what the Unreal Engine 5 can do. The expansive alien landscape is rendered in pretty mesmerizing detail, and its sheer scale is impressive. But it’s obvious Scionti’s talents are in lighting. The reflections off the astronaut’s spacesuit look dazzling, and the cloudy sky looks like it’s been ripped straight from a photograph. You can watch the clip for yourself below.

While the demo is a fan-made project that doesn’t have any official association with Bethesda or BioWare, it offers an interesting look into what triple-A video games like Starfield and Mass Effect 4 could one day look like.

Starfield’s director Todd Howard described the upcoming sci-fi RPG as “Skyrim in Space” in an interview with The Washington Post. But it if looks anything like this tech demo, it’ll be far more than that. Gone are the low-resolution textures and blocky character models; Unreal Engine 5 allows developers to create games at an unmatched level of graphical fidelity.

It’s a shame, then, that Starfield won’t be using Epic’s new Engine, but Bethesda’s in-house Creation Engine 2 instead. With no Starfield gameplay to look at, we haven’t yet been able to see just what that engine is capable of. Here’s hoping it can match, or at least come close to, what Unreal Engine 5 can accomplish. Now Starfield has been delayed, we’ll have to wait until 2023 to find out.

Mass Effect 4, however, is being developed using Unreal Engine 5, so it’s not totally unfeasible that BioWare’s upcoming RPG will look similar to what Scionti has created here. Of course, as a full game rather than a tiny demo, it won’t quite reach the same heights of graphical brilliance, having to scale back its visual features for the sake of smooth framerates. But it’s a tantalizing prospect nonetheless.

Unreal Engine 5 demos have come thick and fast. Skyrim’s Riverwood was recently reimagined in the engine, which made our jaws drop. Another Unreal Engine 5 tech demo showcased what Cyberpunk 2077 might have looked like, rendering a stunning interpretation of Night City. There’s plenty to be excited about as developers push the software to its limit.