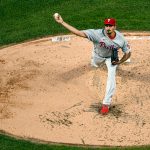 Note: if you purchase something through one of our affiliate links, Schneps Media may earn a commission.

While the Phillies are currently looking to gain some ground back on the Mets in the first of two games today, the team published some pretty important news about RHP Zach Eflin.

LHP Cristopher Sánchez will be the 27th man for today’s doubleheader and will start game 2. RHP Zach Eflin has been placed on the COVID-related IL and RHP Francisco Morales has been recalled from Reading (AA).

Eflin has been placed on the COVID-related IL. He’s 1-2 on the season so far with a 4.50 ERA, allowing 26 hits through 24 innings. He joins Zack Wheeler on the list which is a little concerning for the short-term future.

There’s no minimum duration that players have to stay on the COVID-list. Corey Knebel notably was placed on the list for less than two days just a few weeks ago, and with Wheeler’s next start set for Tuesday on the road in Seattle, there’s a chance we see him back in time for then.

For now though, the Phillies have to try and find a sign of life after their disastrous 8-7 loss to start the weekend. After holding a 7-1 lead going into the final inning, they somehow found a way to blow it. Not ideal.

Christopher Sanchez will replace him for today’s game, which isn’t exactly an encouraging sign. He’s given up 8 hits and 5 earned runs through 6.4 innings and his last 3 games. The Iron Pigs affiliate holds a 5.40 ERA on the season and made his MLB debut in June last year.

He’ll be going up against Chris Bassitt, who is 3-2 on the season and holds a 2.61 ERA. Bassitt has been a strong acquisition for the Mets so far. The former Athletics’ ace has fit in nicely in Queens and he’s proven that he’s able to control the tempo of a game. If the Phils offense can’t heat up in the opening game, then Bassitt may not have all that much to do should morale slide.

Understandably, the Phillies are underdogs going into this matchup. Given that they’ll now be fielding an inexperienced pitcher on the back of what’s been a demoralizing weekend, betting the Mets outright may be the smartest play here.