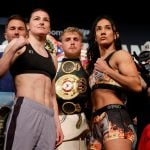 Amanda Serrano and Katie Taylor will make history on Saturday night. They’ll make guaranteed seven-figure purses, something that’s basically been unheard of for women in this sport. They’ll headline the main room at Madison Square Garden. The winner will become the undisputed lightweight champion and will probably be considered the top pound-for-pound fighter in the sport. It won’t only be a night of celebration for women’s boxing. It’ll be a celebration of the sport in general. Here’s everything you need to know about Amanda Serrano vs. Katie Taylor, including the odds, their records, their purses and a prediction on who will win.

In the leadup to the fight, Serrano could scarcely believe she and Taylor were in this spot.

“We’re breaking barriers,” Serrano told me a few months ago. “We’re making history. I’m super glad that I’m one of those women. I thought something like this would be way in the future after I was old and retired.”

But no, it’ll really happen on Saturday—and stylistically, the fight should be a fascinating one. Taylor is aggressive and throws plenty of punches. But she doesn’t have a ton of power punching. Meanwhile, Serrano is one of the top knockout artists in the sport, and it remains to be seen whether she can hurt Taylor and possibly stop her.

Taylor has never lost as a pro, but at the age of 35, you have to wonder how much longer she can perform at such a high level. Serrano hasn’t been defeated in 10 years, but she hasn’t been tested at the highest of levels in quite some time.

It’s basically a pick ‘em fight, and both women are quite aware of what a victory would mean.

“This is history right here and all of our hard work is going to be paid off for at this time,” Taylor said. “I think that this fight is the most exciting fight in the sport, not just female boxing. This really is the best fight in boxing right now.”

While Claressa Shields is also mentioned as the No. 1 pound for pound fighter in the world, she, through no fault of her own, has never fought an opponent who is just as good as she is. Serrano and Taylor will finally get to experience that. And they’ll both make a hefty payday of at least $1 million (it’s a far cry from Taylor making a $4,000 purse in the sixth fight of her career in 2017).

“When I met Amanda, she was telling me the story of how much she was getting paid,” promoter Jake Paul recently told me. “I thought, ‘This doesn’t make any sense.’ This is one of the greatest boxers of all time, male or female, period. She deserves that pay. This is a step in the right direction. The seven-figure payday shows we’re making progress. She’s a knockout artist superstar, and I’m shining a spotlight on her.”

Here’s more info on the Amanda Serrano vs. Katie Taylor showdown that U.S. viewers can watch on DAZN beginning at 7:30 p.m. ET on Saturday.

April 26, 2022; New York, NY, USA; Katie Taylor and Amanda Serrano light up a model of the Empire … [+] State Building which will be lit with their home colors on the night of their headlining fight on April 30th at Madison Square Garden.

If you were looking for a fun parlay for this weekend’s action of boxing (and this is only for entertainment purposes), I might take Serrano to beat Taylor at -150, Shakur Stevenson to beat Oscar Valdez by decision at -187 and the Liam Smith vs. Jessie Vargas fight to go over 10.5 rounds at -175. That would pay out $301 on a $100 wager.

And of course, you might aren’t the only one with a betting interest in this bout.

Unlike most female fighters, forced into fighting two-minute rounds, Serrano (42-1-1, 30 KOs) has an impressive knockout ratio. But then again, she’s only scored four stoppages in her last eights fights, so you have to wonder if her power, which was so prevalent earlier in her career, is beginning to wane as she fights better competition in higher weight classes (she’s won world titles from the 115-pound super flyweight division to the 140-pound junior welterweight division). Her only loss came in 2012 to the undefeated Frida Wallberg in a junior lightweight title fight.

Taylor, the Olympic gold medalist from Ireland, is 20-0 with 6 KOs. But she’s had some close calls in the past few years. She beat Delfine Persoon by majority decision in 2019 (though some believe Persoon should have been awarded the victory) and then defeated Persoon by close unanimous decision in the rematch 14 months later. She’s also had close decision victories vs. Christina Linardatou and Natasha Jones. Can Serrano finally be the one to convince the judges that Taylor didn’t do enough to win?

This could be an outstanding fight, especially if both fighters are aggressive and face off at close quarters. I can see Serrano hurting Taylor, but I think Taylor will use her top-notch skills to survive those scary moments and make this bout a close one. Serrano is just a little too good for Taylor, and I’ll think Serrano will take the decision win and the title of top pound-for-pound fighter in the world. Say, somewhere in the 96-93 range.

UPDATED: It turned out to be a fight worthy of all the hype. Serrano badly hurt Taylor in the fifth round, but Taylor recovered well, won enough of the later rounds and put forth a fantastic effort in the 10th—probably one of the best rounds in women’s boxing history. In the end, Taylor won a narrow split decision to keep her undisputed lightweight championship in front of a sold-out Madison Square Garden crowd (the judges had it 97-93 and 96-93 for Taylor and 96-94 for Serrano; I had it 96-94 for Serrano).