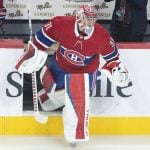 The roar in the Bell Centre on Friday night was unmistakable: Something big was happening. You could hear it and you could feel it. There was a swell as the volume rose.

Was this really for a goaltender taking the ice to warm up before the 75th game of the season, for a proud Montreal franchise mired in 31st place in an incredibly challenging year? Yes it was, and the ovation for superstar Carey Price — playing his first game after personal time away as well as physical setbacks — was an example of how important the final two weeks are for every franchise.

My TSN colleague and analyst extraordinaire Ray Ferraro put it perfectly: “You can’t touch it, but you can feel it. And once you get inside of 10 games … to go, everybody’s temperature goes up.”

In Montreal, where mid-season management and coaching changes generated optimism for a quick turnaround, the 34-year-old Price remains the key to the equation. With four seasons left on an eight-year, $84-million (U.S.) contract that makes him the league’s top-paid guardian, the ability to successfully play a handful of games could boost Price’s confidence in himself and management’s confidence in their goaltending situation, clearing the way for other decisions that must be made.

At the opposite end of the Eastern Conference standings, the Florida Panthers have separated themselves slightly at the top. But the daily juggling from second to eighth continues to spark discussion about the best potential playoff matchups.

Is it possible to peak too early? The Panthers have lost just once in regulation time in their last 10 games. Same for the Maple Leafs heading into Saturday night.

Does a particularly bad loss against an inferior team — that Toronto defeat was to a spirited Buffalo Sabres squad — suggest a lack of focus?

Is it better to play roughly .500 hockey down the stretch — as five of the top eight in the East have been — and concentrate instead on staying healthy and sharp with balanced minutes? And after back-to-back Stanley Cups, are the Tampa Bay Lightning allowed to scuffle late in the season knowing they already understand exactly what it takes to win in the post-season?

The Eastern playoffs are going to be fierce, with four of the top five teams in the overall standings. Some matchups are longed for by one fan base and dreaded by another. And you will never get a player or manager to say publicly who they’d “like to play.” These last two weeks could set up an epic Boston-Toronto matchup and two Florida teams staring each other down. Fun scenarios such as goalie Freddie Andersen in Carolina facing his former team in blue and white could also spice things up.

Meanwhile, the youthful outsiders in the East — Columbus, Detroit, Ottawa and Buffalo, all stocked with potential stars — would like nothing more than to set the table for next season. A confident late run as spoiler could accelerate plans to contend.

The West seems much more conventional with some good old-fashioned races still looming, at least on paper. The real intrigue lies in Las Vegas. After an impressive 11 rounds of playoff experience over their first four years, the Golden Knights are currently on the outside looking up. Deep into a complex web of salary-cap manoeuvring, the addition of pricey superstar Jack Eichel from the Sabres may have caused too much monetary stress to overcome. Of course, if they do elevate their game and squeeze in, they’d be a handful for any opponent in the first round.

The “just-outs” in Vancouver and Winnipeg are still playing important games, but short of running the table would need help to make the post-season. The “just-ins” — Los Angeles, Nashville and Dallas — are already in playoff mode just to hang on to a spot, and would use that as a rallying cry if they make it.

Amid all this is the question of rest versus rust for star players. Load management is a common term in other pro sports, but hasn’t quite hit the frozen pond yet. Tight races and the importance of home ice hasn’t allowed it.

Individual award races, with recency bias among voters, are also a factor late in the season. With major awards such as the Hart (most valuable player) and Norris (top defenceman) still hotly contested, many stars don’t want to sit out while a rival excels.

Win or lose, the roars will continue in buildings around the league through these final games. Pride will carry the day, as professionals play on despite the fact that half the league won’t be experiencing the joys of the post-season. One thing we can be certain of, as my colleague so eloquently put it: Everybody’s temperature will be going up.

Dave Poulin is a former NHL player, executive and TSN hockey analyst based in Toronto. He is a freelance contributing columnist for the Star. Follow him on Twitter: @djpoulin20

Anyone can read Conversations, but to contribute, you should be registered Torstar account holder. If you do not yet have a Torstar account, you can create one now (it is free)

Conversations are opinions of our readers and are subject to the Code of Conduct. The Star does not endorse these opinions.