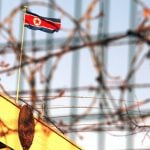 SEOUL, April 13 (UPI) — A U.S. cryptocurrency expert has been sentenced to more than five years in prison and fined $100,000 for helping North Korea evade sanctions, federal prosecutors in Manhattan announced.

Virgil Griffith, 39, pleaded guilty last year to one count of conspiring to violate international sanctions by giving a presentation at a 2019 cryptocurrency conference in Pyongyang, despite having been denied permission to travel to North Korea by the U.S. State Department.

At the conference, Griffith provided information on how North Korea could use blockchain and cryptocurrency technology to launder money and evade sanctions, prosecutors said in their criminal complaint. He later planned to help North and South Korea exchange cryptocurrency, prosecutors added.

The crime carried a maximum sentence of 20 years, but Judge Kevin Castel of the Southern District of New York handed down a prison term of 63 months on Tuesday — on the low end of the range sought by prosecutors — along with a $100,000 fine.

U.S. Attorney Damian Williams said that “justice has been served” with the sentence.

“There is no question North Korea poses a national security threat to our nation, and the regime has shown time and again it will stop at nothing to ignore our laws for its own benefit,” Williams said in a statement.

“Mr. Griffith admitted in court he took actions to evade sanctions, which are in place to prevent the DPRK from building a nuclear weapon.”

The Democratic People’s Republic of Korea is the official name of North Korea.

Griffith, a U.S. citizen who’d been living in Singapore at the time of his arrest, was a prominent hacker and programmer who worked on developing the digital currency Ethereum. His defense team asked for a maximum sentence of two years.

North Korean hackers have increasingly targeted cryptocurrency platforms in recent years to get around punishing international sanctions as the country continues to develop its weapons program.

The secretive regime’s cybercriminals extracted nearly $400 million in digital assets last year, according to a report by blockchain researcher Chainalysis.

North Korea has conducted a flurry of weapons tests so far this year, including the first full launch of an intercontinental ballistic missile since 2017. U.S. officials have warned that Pyongyang may be preparing to test a nuclear weapon as soon as this week.