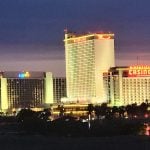 In 1964, Don Laughlin flew in a small plane over the Colorado River near the area where the Nevada, Arizona and California borders met.

He liked what he saw.

“Hey,” Laughlin may have suggested, “let’s skim across the river’s blue waters and scare the heck out of those fishermen in their boats.”

The other passengers on the plane laughed. It was a great idea, and what fun that would be.

“We’ll buzz ‘em good,” he said. “Maybe somebody can throw an apple at them as we fly by.”

No apples flew out of the low flying plane that day, but a high-flying idea got stuck in Laughlin’s mind.

Being a successful business owner from Las Vegas, Laughlin saw great potential for a new venture along the coastline of the Colorado River. Thus a gambling mecca was born.

But let’s step back in time a bit. South Pointe was a small town located near the southern tip of the state of Nevada developed in the 1940s. There was not much there. A motel, bar and a whole lot of brown desert sitting astride the crystal-clear blue waters of the mighty Colorado River.

It was the location where many miners working the nearby gold and silver mines would meet up on Saturday nights for a perfect time.

“Whatcha going to do with all that gold you found?” one miner probably asked another miner.

“Well, heck,” the miner replied. “I’m a gonna go to South Pointe and spend it all in the bar.”

During the 1940s, hordes of construction workers started building the Davis Dam just north of present-day Bullhead City and stayed in a locale called Davis Camp — which is still present and used as a campground for river lovers.

On their time off, which there was not much of, they too wandered into South Pointe for some adult entertainment.

But in 1951, the dam was completed, and the construction workers left. Rumor has it that many miners who frequented South Pointe also stopped going to the bar since their spouses decided to save the gold and silver nuggets was wiser than drinking the family profits.

As dedicated as I am as a researcher, I could not locate any solid evidence to back up my assumption why the miners stopped frequenting South Pointe.

Like a dried-up Joshua Tree, the town started to languish in the desert sun.

And that is when Don Laughlin flew his famous jaunt over Lake Mohave, the reservoir which Davis Dam created, and down along the Colorado River over South Pointe.

He purchased the land, built the Riverside Resort motel and casino, and business was once again booming. Though the resort only had 12 slot machines and two live gaming tables, life was breathing in this southern section of Nevada.

A post office was soon needed due to the number of employees and guests arriving. At first, Laughlin wanted the town known as Riverside and Casino.

The postmaster shook his head. “Nope, let’s call it Laughlin. That is a good Irish name.”

And since the postmaster was also Irish, both men agreed to the town’s new name.

“That would be a fine name, me laddie,” Laughlin may have said to the postmaster.

A bit of Irish history here — I did research this.

The family name Laughlin was first used in County Clare, on the west coast of Ireland, in the 13th century.

And soon, other casinos opened. The Bobcat Club, where the current Golden Nugget is located, and the Monte Carlo soon followed in 1968.

People who loved to fish, water ski, boat or just enjoyed sitting beside sandy beaches or hotel pools in the sun found Laughlin the place.

“You know,” one guest was overheard saying in 1972, “I love the fact, I can fish in the early morning, water ski in the afternoon, eat at inexpensive buffets, and then gamble into the wee hours of the night.”

Laughlin was a mecca, but there was a slight problem turning the mecca into a megapolis.

Bullhead City sat directly across the Colorado River from Laughlin and had grown due to the construction of the Davis Dam, but instead of drying up like South Pointe had, it continued to grow.

The town had direct access to the water playground of Lake Mohave, the water activities of the Colorado River, dirt trails leading everywhere, including the very much alive ghost town of Oatman, and so much more. It was also on Highway 95 and near Route 66, which brought more and more visitors every year.

There was no direct route from Bullhead City to Laughlin across the river, and Don Laughlin knew there was a lot of business he was missing out from all those residents and tourists visiting Bullhead City.

Don Laughlin is one smart cookie. He purchased a huge parking lot across the river from his Riverside Resort in Bullhead City and started free boat shuttles to his resort.

This was ingenious. What person does not like a free boat ride? No one. Trust me. I know many folks who enjoy our boat without a wallet ever being opened.

Business in Laughlin skyrocketed. Instead of driving a long distance, tourists could plop themselves on a free pontoon ride across a short-distance river and, in a flash, be at the Riverside Resort.

During the 1980s, the town was so famous that other investors came a-calling, resulting in the building of the Colorado Hotel — now the Pioneer, Harrah’s Del Rio, the Tropicana Resort. And more came in later, the Aquarius Casino Resort, the Edgewater Casino Resort, and the list go on and on.

One of the most iconic establishments was the Colorado Belle, a hotel and casino built to look like an old-fashioned Mississippi riverboat.

In all transparency, Laureen and I spent some time in Laughlin with our girls. Sun, fun and the water were all it took to make a weekend memorable. We stayed here and there, but one place that we truly loved was the Colorado Belle.

Wandering the decks of this make-believe paddle wheeler was just fun. We would walk here and there looking at this and imagine being here or there along a long river trip.

My family has vivid imaginations when traveling — real or not.

I remember us visiting Pompeii once and . . . but I digress.

Sadly, as of 2020, the Colorado Belle may be closed permanently. The pandemic and other financial issues are the culprits, but who knows. A riverboat knows the sculpture of the rivers it maneuvers, and perhaps there will be a moment when some investor looks at this building and knows there is a whole lot more life to this ship than what appears now.

Of course, that could also be my hopeful imagination in the works.

In 1987, Laughlin decided a bridge should be built just slightly north of his resort, crossing the Colorado River from Bullhead City.

This entrepreneur knew the traffic from Arizona to Nevada would pass his resort first, so he put up $3.5 million to build the Laughlin Bridge.

Both the state of Arizona and Nevada jumped at the idea.

“Use your money to build a bridge that we should build?” a Nevada official may have remarked. “What a marvelous idea. Can it be a toll road for whichever state the traveler is driving into?”

“No,” Laughlin may have replied.

The city of Laughlin receives over two million tourists every year. That is a lot of people looking for fun ways to spend their hard-earned money. And the town does not disappoint.

Laughlin is not just a bunch of gambling destinations — no, it is a family destination.

Not long ago, Laureen and I attended a Rod Stewart concert at the Laughlin Event Center.

There are venues all about Laughlin, with acts for all ages — music, comedy, theatre, and the like.

This city has something for everyone — and that is not just rhetoric.