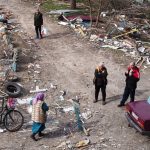 In early April, as Ukraine started to regain control of Bucha and other small towns northwest of Kyiv, appalling imagery began to spread on Telegram and other social networks. Photos and videos showed bodies in the streets and anguished survivors describing loved ones, civilians, killed by Russian soldiers. In Chernivtsi, in western Ukraine, attorney Denys Rabomizo carefully built an archive of the gruesome evidence. His aim: to preserve social media posts that could help prove Russian war crimes.

“Psychologically it’s very difficult to look at,” says Rabomizo, who coordinates a team of more than 50 volunteers who gather online material and also contact witnesses to alleged atrocities to gather testimony. “So I think about trying to archive all this in a proper way to be used in the future.”

Such evidence could, in the months and years ahead, be submitted to the International Criminal Court in the Netherlands, which said in February it would begin investigating alleged war crimes and crimes against humanity in Ukraine. Cases over actions in Ukraine might also be brought at the European Court of Human Rights or in countries like Germany that prosecute certain crimes beyond their borders.

“Capturing social media from Ukraine is an incredible source of evidence,” says Alex Whiting, deputy prosecutor at the Kosovo Specialist Prosecutor’s Office in the Hague, and a visiting professor at Harvard University. A deluge of TikTok and Telegram posts could vastly increase the amount of evidence of alleged Russian war crimes—but they will only aid prosecutions if judges accept such material in court.

War crime cases are usually built with witness testimony, documents, and conventional forensic evidence, but all are hard to collect after the chaos of war. Open source investigation methods that combine clues across social posts and other sources could fill crucial gaps, says Whiting. But they have rarely featured in such cases to date, and material posted by persons unknown has been seen as unreliable and at risk of manipulation.

Rabomizo and others working on the conflict in Ukraine, including open source investigators at Bellingcat, believe they can change that with new, more rigorous protocols and technology for archiving posts. “Ukraine will probably be the first time open source evidence will be tested extensively in court,” says Nadia Volkova, director of the Ukrainian Legal Advisory Group. She’s been helping Rabomizo and others document potential war crimes through an alliance of Ukrainian human rights organizations called the 5AM Coalition, named for the moment on February 24 that the first explosions rocked Kyiv.

Although open source evidence has not been well tested as evidence of war crimes, there are signs that the idea is becoming more mainstream. In December, the United Nations Human Rights Office and lawyers at UC Berkeley released legal guidelines, called the Berkeley Protocol, for gathering, verifying, and using open source and social media evidence of human rights violations. Volkova has been following the protocol, and Berkeley’s Human Rights Center has been advising her and others in Ukraine.

Collecting online evidence so that it can meet the standards of a criminal court requires painstaking work. Links logged by Rabomizo and volunteers working with him are fed to a nonprofit called Mnemonic, which has created software that downloads social posts from different platforms and generates a cryptographic hash to show the material has not been altered. It saves the posts into a digital archive that will be made available to investigators. Mnemonic operates similar collections for conflicts in Yemen, Syria, and Sudan. Its material has contributed to criminal complaints filed in Germany and Sweden against Syria’s use of chemical weapons, but the cases have not reached court.

This is not the first time Ukraine has become a testing ground for the use of online posts as evidence of military crimes. Bellingcat, which has pioneered and popularized the public use of open source intelligence, or OSINT, won prominence through its investigation into Malaysia Airlines flight 17, from Amsterdam to Kuala Lumpur, which was downed over Ukraine in 2014.