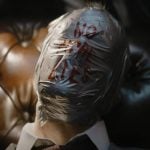 We knew the latest Caped Crusader film starring Zoe Kravitz as Catwoman and Robert Pattinson would be more intense than the films from the ’90s – and boy, is it dark – but we weren’t 100% sure that they’d live up to the legacy of Christopher Nolan’s Dark Knight Trilogy.

The latest trailer for The Batman that made its debut on Warner Bros. Pictures’ YouTube page and showcases Paul Dano’s dark new take on the Riddler and a taste of Batman and Catwoman’s tenuous relationship has totally changed our minds.

Take a look for yourself:

The film comes from director Matt Reeves and is set to release exclusively in theaters on March 4, 2022.

Jigsaw is that you?

If you’re of a certain age, you might remember The Riddler being played by Jim Carrey in 1995’s Batman Forever. Carrey brought a certain brand of… uh, lunacy, to the character, however he wasn’t all that convincing as a crime lord or potential rival to Batman.

Paul Dano’s Riddler, however, isn’t playing around. His willingness to mercilessly kill – as evidenced by the trailer – shows that The Riddler is actually as deranged as The Joker and is just as motivated to find out who’s hiding under Batman’s cowl. He’s giving off some real Jigsaw vibes, honestly.

This deadly intent to find out who The Batman is, and crumble the Wayne’s legacy along the way, is proving to be a superbly compelling plot line for a Batman film.