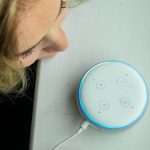 It can be hard to keep children entertained in the week between Christmas and New Year’s. So, it’s not surprising that a 10-year-old in the UK turned to Amazon’s Alexa digital assistant for some fresh ideas after her family finished their list of fun physical challenges.

In this case, according to a report from the BBC, Alexa found her what’s known as “the penny challenge,” a viral stunt where people plug a phone charger partially into a wall outlet and then touch a penny to the exposed prongs. Alexa apparently described to the young girl just how the challenge works.

Instead of following Alexa’s guidance, the child’s mother, Kristin Livdahl, who overheard the suggestion, shouted a quick, “No!” and the crisis was averted. However, Livdahl told the BBC that her daughter was too smart to follow that advice, anyway.

They also alerted Amazon, which has already updated Alexa so this kind of bad idea doesn’t issue from the system’s digital lips again.

In a statement given to the BBC, Amazon said, “Customer trust is at the center of everything we do and Alexa is designed to provide accurate, relevant, and helpful information to customers.  As soon as we became aware of this error, we took swift action to fix it.”

It’s worth noting here that Alexa, like Siri, and Google Assistant, is not a sentient being seeking to prank unsuspecting humans. For most search queries, like “Find me a challenge,” it turns to a search engine – in this case, Microsoft’s Bing – to find relevant results. Alexa will usually let you know this by saying, “This is what I found on the Web.”

TechRadar checked in with Alexa on Tuesday, asking it in a number of different ways if it could provide us with a new challenge. Nothing remotely dangerous (or interesting, for that matter) came up.

When we checked TikTok, we did find a few instances of the aftermaths of the year-old “Penny Plug Challenge.” All of them looked disastrous. One, however, was from a paramedic, explaining just what could happen if you tried it (he’d be pulling you from the burning wreckage of your home).