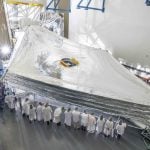 After far too many delays over the years to count, NASA’s James Webb Space Telescope has a launch date. Provided there’s not another last-minute setback, the successor to Hubble Space Telescope is scheduled to take flight on Saturday, December 25th.

NASA expects the Ariane 5 rocket carrying the JWST to lift off no earlier than 7:20AM ET on Christmas Day from the Guiana Space Center in Kourou, French Guiana. You can watch the entire event unfold, beginning with pre-launch coverage, starting at 3AM ET. The space agency will broadcast the launch on its NASA Live website, as well as on Facebook, Twitter, YouTube and Twitch.

Understandably, there’s a lot of excitement for the JWST to finally make its way into space. Not only will a successful launch represent the end of a tumultuous 14-year development cycle, but the telescope, with its far more advanced sensors than Hubble, will afford astronomers to glimpse at black holes and early galaxies in a way they haven’t been able to do in the past.